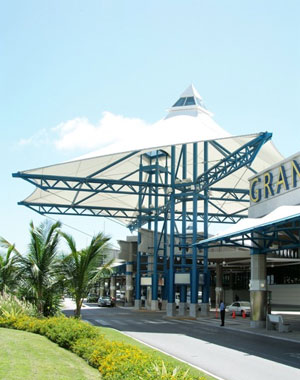 GAIA is Barbados’ only airport and the aviation hub of the Eastern Caribbean, handling daily flights to and from the other Caribbean islands connecting to major cities in the US, Canada, UK and Europe. Nonstop flights occur daily to London, Toronto, New York and Miami as well as to most of our Caribbean neighbours.

From 2004-2006, GAIA undertook a major terminal expansion and renovation project which saw us transform from a  single terminal building into a two-terminal facility with dedicated departures and arrivals terminals. These buildings are linked by a fresh, tent-themed architectural approach to take full advantage of our tropical climate, yet be totally functional and modern. These changes cater to increased aircraft and passenger arrivals and ensure the comfort of all users of the airport.

GAIA is located in the south-east of the island, along the Adams-Barrow-Cummins Highway, just half an hour’s journey to the spectacular west coast beaches. South coast and city destinations are all minutes away by car or public transport.

The Airport operates on a 24-hour basis and has handled almost every type of aircraft, from the fastest passenger aircraft the Concorde, which until 2003 operated scheduled services to Barbados, to the heavy lift US (C5A) and Russian (AN124) cargo aircraft. GAIA has a Concorde museum next to our departures terminal which houses the ex-British Airways aircraft G-BOAE.

There is Common Use Terminal Equipment (CUTE) at both check-in and the gates to enable airlines to check in from any counter and to better accommodate traffic by scaling up as needed. The expansion and refurbishment of our facilities provided for more airline office space and there are new flight information displays throughout the departures terminal, as well as a new transit facility.

The baggage system from the check-in counters to the baggage area is equipped with X-Ray hold baggage screening equipment to ensure that all aircraft hold luggage is screened.

The 11,000 ft asphalt runway has all required landing and other navigational aids and is one of the longest runways in the eastern Caribbean.

The Airport is also an excellent cargo trans-shipment point for the region and is increasingly popular for this purpose between South American and European carriers.

Various small operators such as Trans Island Air, St. Vincent and Grenadines Air, Mustique Airways and Executive Air, operate air-taxi and day-tour charter services into and out of Barbados.

Some of the major carriers including charters operating into Barbados are:

Do what you can ahead of time, such as pay bills, and make thorough arrangements for what you may need to have dealt with in your absence.  If someone will have to act on your behalf officially, make the necessary phone calls and write letters that will be required.